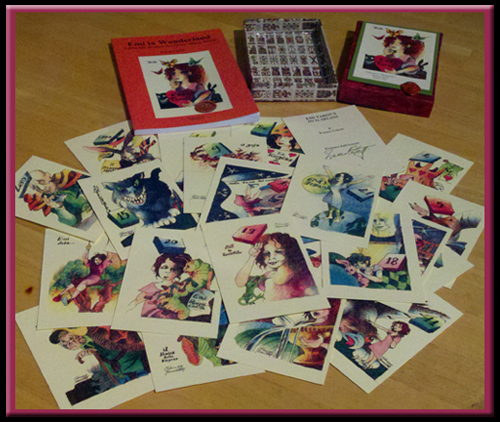 Emi in Wonderland Tarot is (full disclosure) a special project for me. When I first saw this adorable deck and heard Mr. Coletti had written a story for his little friend Emi which was inspired by their mutual enchantment with Alice in Wonderland, I asked Morena Poltronieri if it was possible...to perhaps make it available in English. I had read a bit of his (translated) prose and was already a fan of Franco's art & verse. Many Tarotists are parents and/or grandparents (like me)...and I bet some would delight in having a precious, handcrafted set such as this to share with little ones or for a special occasion. I am thrilled with this collaboration from Osvaldo Menegazzi (of il Meneghello) in Milan, with amico Franco Coletti and friends at the Tarot Museum in Bologna. A magical collaboration!


Back to Arnell's U.S. Inventory & Reviews of the Tarot Museum Decks